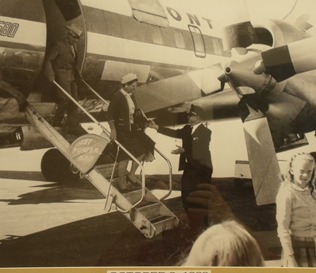 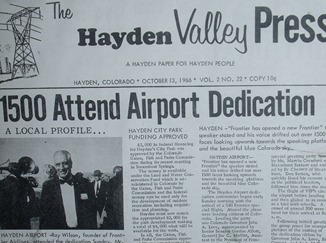 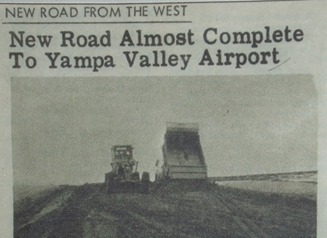 With the increase of the energy industry in the Yampa Valley and the building of the new ski area on Mount Werner in Steamboat Springs in the early 1960’s, it was decided by the surrounding communities there was a growing need for transportation in and out of the Valley. These factors led the communities to look at air service as a solution to the destination area transportation issue.
June 7, 1966 – Groundbreaking for the Yampa Valley Regional Airport (YVRA), just one and a half miles east of Hayden (HDN), was conducted. Only a short 4 months later on October 9th, Frontier Airlines landed the first commercial aircraft, a jet prop Convair 580 – 53 seat aircraft on a 7,000-foot runway, with a scheduled daily 39-minute flight from Denver to Hayden.

Along with the skiing and travel industry, air service continued to grow. In 1986, the runway was lengthened to 10,000 ft. to accommodate the larger aircraft such as the Boeing 757 and 767. With the subsequent increase in air traffic, another major construction project was conducted in 1987-88 to upgrade the terminal and taxiway.

Flights continued to increase. In the midst of the 1988-89 winter flight season, YVRA was rated the third busiest airport in Colorado.

On October 9, 2006, YVRA celebrated its 40th year as a commercial service airport.

In 2007, YVRA became self-sufficient and was able to cover all operating costs through user fees and concession revenue. Since that time, YVRA has operated without any County revenue.

Our “Phase III” construction began in 2009, was completed in 2012, and included an expanded baggage claim area, addition of a new first class restaurant, The 3 Wire Bar & Grill, and moving the Administrative Offices to the terminal area. This change also allowed for future expansion of the commercial apron area (commercial aircraft parking) into the current footprint of the Old Administration Building, to allow for future increases in flights coming into and going out of YVRA.

Atlantic Aviation purchased the Fixed Base Operator (FBO in 2014), adding to its 70+ locations around the Country. Atlantic is considered one of the top FBO service providers in the United States and is a welcome addition to YVRA.

In 2016 YVRA completed a 500,000 gallon water tank project in partnership with the Town of Hayden, purchased two new pieces of snow removal equipment, and installed a new LED airport beacon.

2018 saw the expansion of our commercial apron to accommodate one more large commercial (757-sized) aircraft and 2019 brought the relocation of Atlantic’s FBO to a new 320,000 sf ramp on the east end of the Airport.

The Yampa Valley Regional Airport (YVRA) currently has air service from United, Southwest, American, Delta, JetBlue and Alaska Airlines with direct flights to and from Atlanta, Boston, Chicago, Dallas/Fort Worth, Fort Lauderdale, Houston, Newark, Washington DC, Los Angeles, San Diego, San Francisco, Seattle, MInneapolis and Denver (with connections to 350 other destinations). With its non-stop flights connecting Steamboat Springs, Hayden, and the Yampa Valley to many parts of the world, YVRA continues to be the transportation heartbeat of the Valley and the gateway of choice to Steamboat Springs, Hayden, Craig and all of Northwest Colorado.